Karol Wojtyła was born on May 18th, 1920 in Wadowice, Poland, to Karol Wojtyła and Emilia Kaczorowska. The youngest of three children, he lost his mother and two older siblings at a young age and became close to his father, after whom he was named. “My father’s words played a very important role because they directed me toward becoming a true worshiper of God…I was left alone with my father, a deeply religious man. Day after day I was able to observe the austere way in which he lived…his example was, in a way, my first seminary-a kind of domestic seminary.”

This idea that the family is a child’s first school is a theme that John Paul II emphasized throughout his papacy, most notably in his Apostolic Exhortation, Familiaris Consortio. “The family is the first school of those social virtues which every society needs,” he says in this writing. Catholic education allows for the smoothe integration of social and moral values into not only the curriculum but also the everyday life of a student, building upon the foundation families have put into place and continuing the integration of whole-person education in every aspect of life. Additionally, it creates a space to harmonize and build community among Church, school, and family.

After completing high school in 1938, he enrolled in the Jagellonian University of Krakow. As World War II began and Nazi occupation forced the closure of his college, Wojtyła was forced to take a job working first in a quarry and then in a chemical factory, both to support himself as well as to avoid being deported to Germany. While working, he continued his education at an underground seminary in Krakow and even organized a secret theatre group known as the “Rhapsodic Theatre.” John Paul II’s persistence in his education despite the obstacles and even danger surrounding it at the time is a testament to its importance in every time and place, not only for individuals but also to society as a whole. His involvement in the arts demonstrates the value of creative expression and the need for well-rounded formation. After all, education is not just textbooks and curriculum–it is also music, fine arts, fitness, teamwork, prayer, critical thinking, and forming the conscience with virtue.

In an address to US bishops near the turn of the century he said, “In a cultural climate in which moral norms are often thought to be matters of personal preference, Catholic schools have a crucial role to play in leading the younger generation to realize that freedom consists above all in being able to respond to the demands of the truth.” Catholic education is not only ordered toward the discernment of truth, but toward the embodiment of Truth: God. By teaching virtue and discipline in the context of community and Tradition, parents and teachers form young people who are aware of the goodness around and within them, as well as the evil that breaks in, and empowers them with the courage and strength to seek God in word and deed.

On April 16, 1979, John Paul II shared this message with the National Catholic Educational Association of the United States, “The Church needs men and women who are intent on teaching by word and example – intent on helping to permeate the whole educational milieu with the spirit of Christ.” We know that children learn from what we say but even more from what we do. While this is a great responsibility, it is also a great opportunity to share God’s love and commandments with youth, whose identities and consciences are in constant formation. Even the smallest decisions, from the things we buy and what we wear, can influence others. This idea of living out our Catholic faith is central to our mission at Sock Religious.

We aim to start conversations with joyful products, but we do not stop at the images and phrases on our socks, stickers, and T-shirts. We source our materials ethically (including recycled textiles!) in the US and employ local tradesmen to knit our socks; we select packaging that is durable, recyclable, and compostable; we employ a diverse crowd of spunky Catholics and non-Catholics to bring our mission to life. This is just one of many ways we can share the joy of the Gospel with those around us, and teach through what we say as well as what we do.

Inspired by John Paul II and with a new school year underway, we pray for all educators, students, and parents with the words of John Paul II himself, “An Act of Entrustment to Mary”:

wanted to entrust us to you,

his exclusive role as Saviour

If in the disciple John

all the children of the Church were entrusted to you,

the happier I am to see

the young people of the world

entrusted to you, O Mary.

To you, gentle Mother,

whose protection I have always experienced,

this evening I entrust them to you once again.

All seek refuge and

protection under your mantle.

You, Mother of divine grace,

make them shine with

the beauty of Christ!

The young people of this century,

at the dawn of the new millennium, still live the torment that derives from sin,

from hatred, from violence,

from terrorism and from war.

But it is also the young to whom the Church looks confidently, knowing

that with the help of God’s grace,

they will succeed in believing and in living as Gospel witnesses

help them to respond to their vocation.

Guide them to the knowledge of true love

and bless their affections.

Support them in times of suffering.

of Christ’s greeting on Easter Day:  Peace be with you!

With them, I also entrust myself

once again to you

and with confident affection

I repeat to you:

I am all yours!

And each one of them

cries to you, with me: 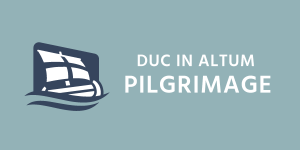